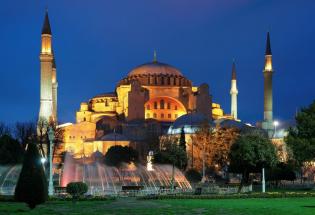 Today, your cruise ship will dock at one of the most important and inspiringly beautiful cities of the world history: Constantinople! Meeting your private guide at Istanbul Port, you will board your luxury van to start your explorations in Istanbul. You will firstly visit the breathtaking Blue Mosque standing in great prestige with its six minarets and perfectly proportioned dome. Continue your morning with the magnificent home of the Ottoman Sultans: Topkapi Palace! Today, you will enjoy an intense tour of the palace going through the corridors and different sections of also the Harem where Sultan lived with his family members. Leaving the Harem through the “Golden Corridor”, you will reach the inner courtyard to see the Treasury that displays exclusive examples of jewelry and accessories which were dressed by the Sultans or were given as gifts to ambassadors. Your next stop is the Basilica of Saint Sophia built by Justinian the Great during 6th century. Adorned with rich mosaic murals and colossal columns, Saint Sophia is a true world heritage that has accommodated various faiths throughout the different periods of history. Later in the afternoon, you will find yourself drifting through one of the earliest shopping malls ever built in history, Grand Bazaar which maintains its charm and volume of business to the modern day with its indoor and outdoor sections. Nuru Osmaniye District (Glamour of the Ottomans) neighbouring the Grand Bazaar was where the Genoese and Venetian merchants had their ware houses to store their inventory of brass, copper, rugs and tiles before they were loaded on the ships to sail to Venice and Genoa. Today, Nuru Osmaniye District is where you can find the most reputable stores with wide collections of jewelry, antiques and oriental rugs. Your guide will drop you off at your hotel at the end of your sightseeing for check-in and relaxation. Overnight in Istanbul.

Driving through the Old City, the impressive view of the Roman Walls of Emperor Theodosius will greet you this morning before you reach Suleymaniye Mosque standing in glory on the southern shores of the Golden Horn, the inlet of water that separates the European section of Istanbul. You will head afterwards to a treasure hidden in the back streets of Old Constantinople: Church of Chora, Church of St. Saviour Out In The Country. Hosting some of the most glorious golden mosaics of Byzantine Culture, Chora represents an era when imposition of art was a reason to live. You will then move on to Rustem Pasha Mosque, a small mosque dating back to 16th century and accepted as the best example for mural ceramic ware that Ottoman artisans created during the Renaissance. Narrow alleys winding away from the mosque will take you to the bustling atmosphere of the Spice Market, dating back to the 17th century, but still the most popular bazaar visited by locals to shop for fresh ingredients to spice up the dishes prepared in the kitchens of Istanbul. Crossing the Galata Bridge that connects the shores of Golden Horn, you will arrive in Karakoy to take a short ride on Tunel, the first underground urban railway in continental Europe dating back 19th century. A short stroll after getting off the ancient cable car style subway will bring you to Galata, the neighborhood that hosted non-Muslim European communities migrating to Istanbul during 18th and 19th centuries to benefit from the capitulations granted by the Ottoman Sultanate. You will have the chance to watch the skyline of Istanbul from the very peak of 13th century Galata Tower that was built by the Genoese merchants to look out for their ships arriving with their loads of goods brought for the markets of this cosmopolitan city. You will return to your hotel for your final night in Istanbul with fond memories of today’s sightseeing. Overnight in Istanbul.

Our representative will meet you at the lobby of your hotel today to escort you on your private transfer to the international terminal of Istanbul Ataturk Airport and assist you with the check-in procedures to board your international flight and bid farewell to Istanbul.

- Services of an English-speaking professional private tour guide for touring.

- Transportation by deluxe A/C non-smoking minivan throughout the program.

- All entrance and parking fees for the sightseeing mentioned in the program.

- Complimentary refreshments throughout the journeys on the vehicle.

- Honorary gratuities for the guide and driver.